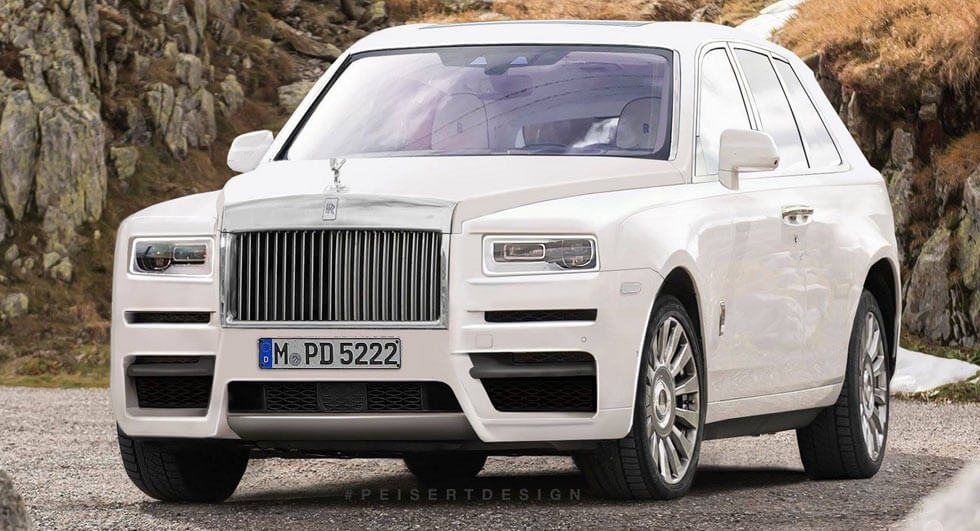 Rolls-Royce is putting the finishing touches on its first crossover and Peisert Design has created some renderings of what the model could look like.

Using previous spy photos of the Cullinan, Peisert Design went to work and created a handful of renderings which seem to accurately predict what the crossover could look like. As you can see in the side-to-side photos, the Cullinan is heavily influenced by the all-new Phantom but it adopts a modified front bumper with larger air intakes. The renderings also show a shorter grille that is flanked by larger headlights.

Unfortunately, the rear of the crossover is pretty plain as the only distinguishing characteristics are suicide rear doors and a heavily raked D-pillar.

Rolls-Royce has been slowly teasing the model and the company has already confirmed the Cullinan will ride on the “Architecture of Luxury” that underpins the Phantom. The car’s twin-turbo 6.75-liter V12 engine – that produces 563 hp (420 kW) and 663 lb-ft (900 Nm) of torque – should carryover and it will likely be connected to an eight-speed automatic transmission and an all-wheel drive system.

While it won’t be the prettiest Rolls-Royce ever created, the Cullinan will have an opulent interior with wood trim, metallic accents, and premium leather upholstery.