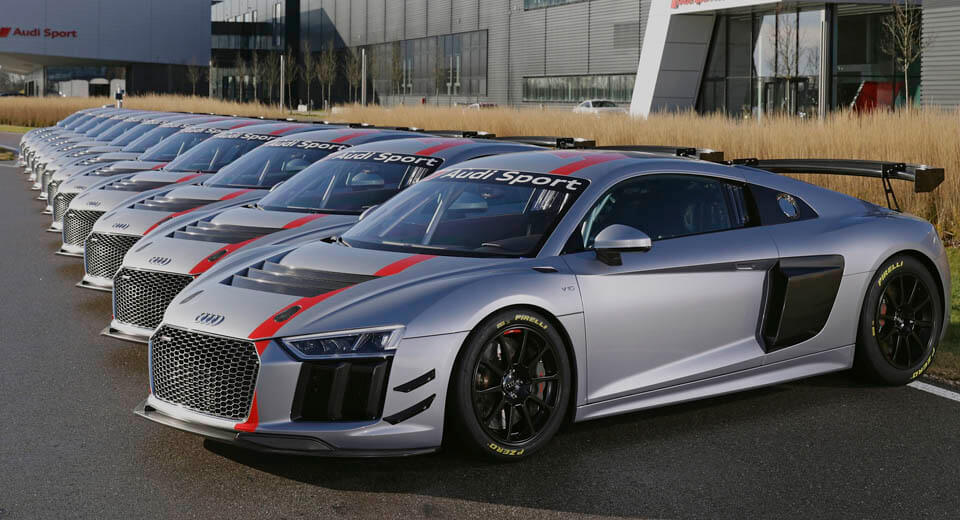 GT4 is rapidly growing into one of the hottest classes in motor racing, and Audi is officially getting in on the action this week with the delivery of the first examples of the new R8 LMS GT4.

Unveiled at the New York Auto Show this past fall, the R8 LMS GT4 is closely based on the road-going production model. In fact, Audi says the road and race versions share some 60 percent of components.

The other 40 percent are what transform this into a racer ready to take on the similarly prepared versions of the Porsche Cayman, Mercedes-AMG GT, BMW M4, and McLaren 570S (to name but a few).

The factory entered the R8 LMS GT4 in races at the Nürburgring for shakedown purposes. Now, as with the GT3-spec R8 LMS and TCR-spec RS3 LMS, it’s now up to the individual teams who’ve purchased the cars to enter them in races around the world.

A dozen vehicles represented the first batch to be delivered, with five cars going to the United States, one to Australia, and two each to teams in Asia, Germany, and the Netherlands. Look to see them in action early in the new year at events like the Dubai 24 Hours, the Rolex 24 at Daytona, and the Bathurst 12 Hour race. The vehicle will also form the backbone of the Audi R8 LMS Cup that’s set to kick off its seventh season in March.