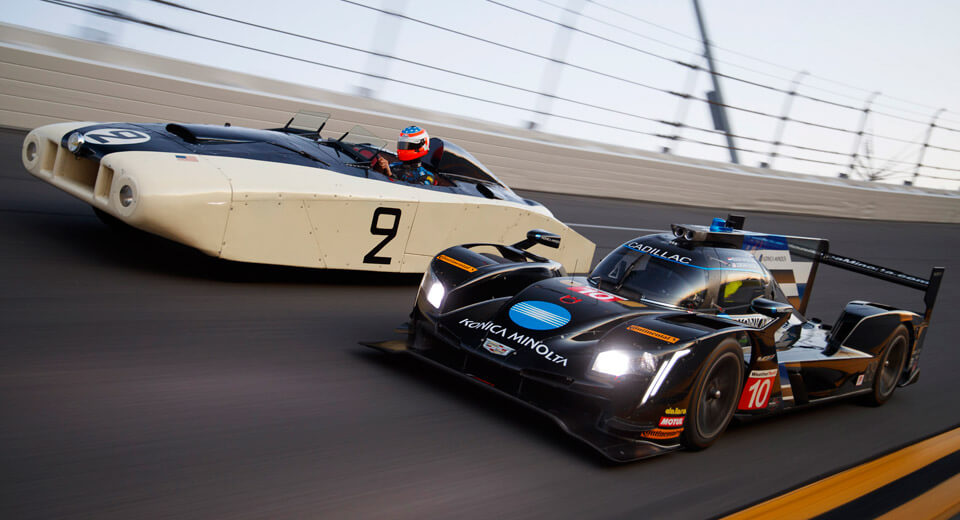 Cadillac has been around for a long time. 115 years, to be precise. In that time, it has raced extensively, and as you might expect, its racers have changed a lot over the decades.

Jordan Taylor got to find that out for himself first-hand this week at Daytona, where he drove the 1950 Cadillac Series 61 Le Mans racer known as “Le Monstre.”

French (as you might have guessed) for “the monster,” the one-of-a-kind racing prototype was rebodied in aluminum with a streamliner shape to take on the 24 Hours of Le Mans in 1950 (alongside a production-bodied version of the same). It ultimately finished eleventh, but its jet-age shape made an impression or two.

Nearly seven decades later, Taylor found it to be a radically different driving experience to the Cadillac DPi-V.R prototype he drove to victory in the 2017 IMSA WeatherTech SportsCar Championship. The two endurance-racing prototypes are both powered by Cadillac V8 engines, but that’s about where the similarities end.

Le Monstre‘s engine displaced 5.4 liters and produced just 160 horsepower, where the DPi-V.R dispatches 6.2 liters to the effect of 580 hp (in accordance with series regulations). Where the new one uses Brembo disc brakes to keep its 2,050 pounds of curb weight in check, the old one used drum brakes to anchor its 3,700 pounds.

“On the first lap going into the Bus Stop, I went for the brake, and I am not sure I’ve ever driven anything with full drum brakes before,” said Jordan. “When I got up high onto the banking, I looked left at the DPi-V.R on the inside and felt like I was going to fall out of the car. The relative lack of safety back then, and lack of support around the driver were crazy feelings.”

“You don’t get the sensation of how steep the Daytona banking is in the Cadillac DPi-V.R at over 170 mph,” continued the new IMSA champ. “I couldn’t imagine what it was like doing over 130mph down Mulsanne lap-after-lap for 24 hours. It was a great experience to be able to drive a car with such a great Cadillac history.”

Le Monstre is currently part of the Collier Collection at the Revs Institute in Naples, Florida, about four and a half hours south of the Daytona Motor Speedway where Jordan got to drive it for four laps at the end of the last IMSA test session of the year.

“Getting the chance to drive a car that raced in the 1950 Le Mans 24 Hours was super-exciting,” he said of the experience. “Besides trying to learn a three-speed column shift, I had to turn the steering wheel past 90 degrees to get it turn. Combine that with the car weighing 3,700 lbs. on skinny tires – it was a handful.”