If you were in the market for a performance crossover from mainstream brands, your choices used to be fairly limited but that’s been changing over the past few years as automakers have rolled out models such as the Dodge Durango SRT and Jeep Grand Cherokee Trackhawk.

The latest to join the fray is the Ford Edge ST which is celebrating its debut at the North American International Auto Show. While the model isn’t nearly as powerful as the Durango or Trackhawk, it features a twin-turbo 2.7-liter V6 engine which produces 335 hp (249 kW) and 380 lb-ft (514 Nm) of torque. It is connected to eight-speed automatic transmission and a standard all-wheel drive system.

Those aren’t earth-shattering figures but Ford says the Edge ST has the most powerful V6 engine in its class. It’s also a healthy increase over the previous Edge Sport which featured the same engine rated at 315 hp (234 kW) and 350 lb-ft (474 Nm) of torque.

Besides the upgraded engine, the Edge ST has a sport-tuned suspension and a special Sport mode which provides a more aggressive throttle response, revised shifting patterns, sharper engine braking, and a more robust exhaust note.

On the styling front, the crossover has an aggressive appearance thanks to a sportier front fascia with a mesh grille. The model has also been equipped with new side skirts, a unique dual exhaust system, and 20-inch wheels which can be outfitted with summer-only tires.

The performance-oriented model is based on the facelifted Edge which features a revised front fascia with a new grille and standard LED headlights. The model also has a new hood, a revised liftgate, and an updated interior with a redesigned center console as well as a new rotary gear selector.

Under the hood, there’s an upgraded 2.0-liter EcoBoost engine which now produces 250 hp (186 kW) and 275 lb-ft (372 Nm) of torque. The engine is connected to a new eight-speed automatic transmission and it features start/stop technology to improve fuel efficiency.

Both the Edge and the Edge ST will go on sale in the United States this summer. 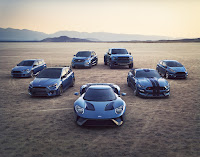