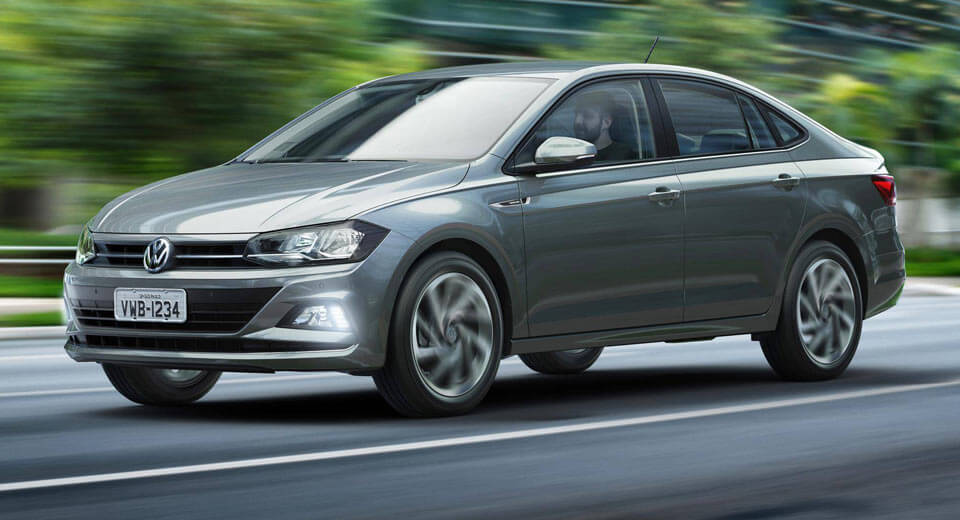 After a number of leaks and a revealing teaser, the 2018 VW Virtus has just premiered in Brazil.

Essentially a sedan version of the Polo that will be sold exclusively in South America, the Virtus will directly rival the likes of the Honda City, Toyota Yaris Sedan, Fiat Cronos and Chevrolet Prisma.

Like the Polo, the 2018 Virtus is underpinned by the carmaker’s MQB-A0 platform and should be available with the same selection of powertrains. As it stands, VW’s South American arm has confirmed just one model, the 200 TSI. It utilizes a 1.0-liter TSI three-cylinder turbo engine delivering 128 hp with ethanol and 115 hp with petrol. Both fuels deliver the same 147 lb-ft of torque, allowing for a 0-100 km/h (62 mph) time of 9.9 seconds and a 194 km/h (120 mph) top speed. Additional variants are expected to be announced shortly.

As expected, the exterior design of the Virtus is a mish-mash of the Polo hatch at the front and the Jetta sedan at the rear. More impressively, the sedan’s interior utilizes a 10.25-inch screen for the gauge cluster and an eight-inch touchscreen infotainment system with Apple CarPlay, Android Auto, and Mirrorlink.

Discussing the car, President and chief executive of Volkswagen South America Region and Brazil, Pable Di So, said the Virtus is an important model in the brand’s updated local range.

“We are advancing in South America – and are renewing our model range in Brazil step-by-step. Following the presentation of the new Volkswagen Polo a few weeks ago, the Virtus is a further key element in our drive to take Volkswagen back to the lead in the region.”

Prices have yet to be announced.